Milt was instrumental in facilitating Coope’s recruitment by Midland and he continues to seek out similar opportunities for our other young and upcoming players. 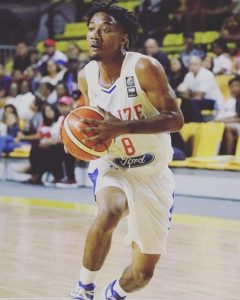 In 2017, at the age of 19 years old, Coope made his National Team and international play debut this time at the men’s level, and as the starting point guard, led our Team Belize to a bronze medal in the Central American Games in Managua, Nicaragua. Basketball was the only team sport to medal for Belize in those games. Coope averaged 14 points, 4 rebounds and 4 assists per game, impressing Coach Milt and earning the respect of the opposing teams.

Coope played big again for Belize in 2018 leading us to a silver medal in the COCABA World Cup qualifier tournament held at the Civic Center in July, 2018. This qualified us for the second round of play which was held earlier this year in February, again right here in Belize. Fans may recall his brilliant performances against regional powerhouses Antigua, Cuba and the Bahamas.

Coope departed Belize on 21 August and we anticipate great achievements from our young star.

A modest but fearless warrior who stands a few inches taller due to the size of his heart, Coope comes from humble beginnings. We know that he will make the most of this opportunity for himself, his family and for Belize.

The BBF expresses gratitude to Coach Milt Palacio, Coach Patrick Rafferty from Midland College, Coach Matthew Smiling, Jay Jex, Mayor Bernard Wagner and the Belize City Council, and VIP Wireless who have all contributed to make this possible for Coope.