Belize Port Commander Awarded as an International Woman of Courage

U.S. Secretary of State John Kerry will present the 2016 Secretary of State’s International Women of Courage Award to a group of extraordinary women from around the world tomorrow at the U.S. Department of State.

The Secretary of State’s International Women of Courage Award annually recognizes women around the globe who have demonstrated exceptional courage and leadership in advocating for peace, justice, human rights, gender equality and women’s empowerment, often at great personal risk. Since the inception of this award in 2007, the Department of State has honored nearly 100 women from 60 different countries. 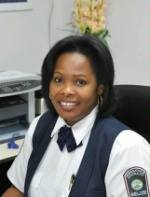 [blockquote style=”1″]In an institution largely dominated by men, 20-year Belize Department of Immigration veteran Debra Baptist-Estrada has consistently refused bribes and other incentives to look the other way. As Port Commander of Belize’s only international airport, Ms. Estrada worked with U.S. officials last spring to crack open a drug and human smuggling operation to the U.S. and Europe. After being transferred to Belize’s northern border this summer, Ms. Estrada continued to bring her incorruptible style to the job, enforcing immigration laws that had not been enforced for a very long time, and rejecting bribes to look the other way. While many might shrug off corruption as “the human condition,” Ms. Estrada is quietly and courageously effecting change and strengthening the rule of law.[/blockquote]

On April 1, the honorees will travel to cities across the United States to engage with the American people through anInternational Visitor Leadership Program. They will visit Missouri, Kentucky, Alabama, California, North Carolina, Michigan, Minnesota, and Pennsylvania on their individual programs. The women will reconvene in Los Angles to reflect on their visit and discuss ways to work together to improve the lives of women and girls around the world.

To mark the milestone of honoring nearly 100 women from 60 countries over 10 years, the State Department will host a forum following the ceremony.

The International Women of Courage Award ceremony and forum will be open to credentialed members of the media and livestreamed at www.state.gov. Please click here for more information.

Use #WomenOfCourage for news and updates about this year’s award.

For more information on these events, contact Rachel Wallace at [email protected].