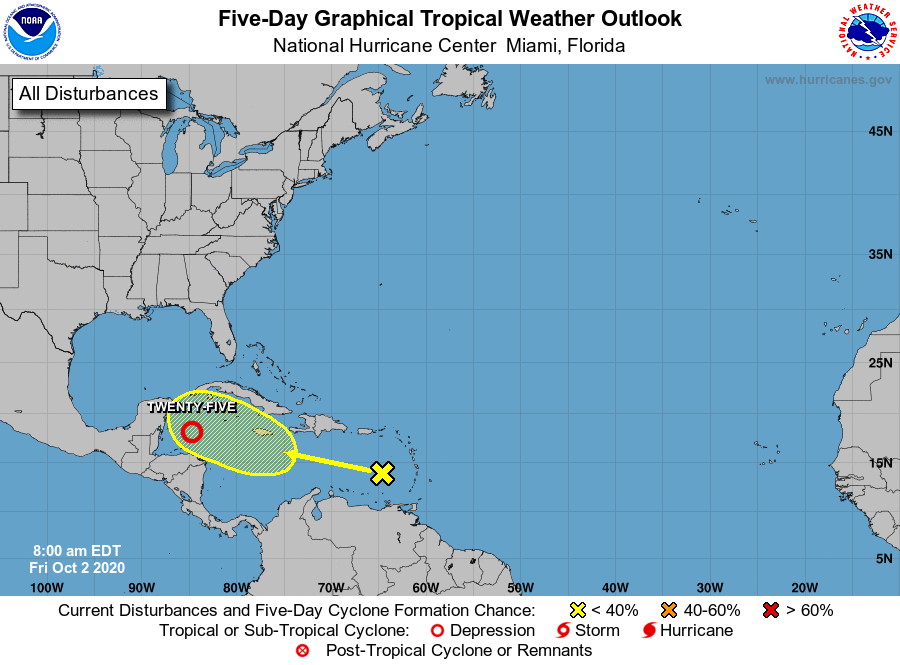 WARNINGS AND WATCHES ISSUED FOR A PORTION OF THE YUCATAN PENINSULA…

At 11 a.m. EDT, the center of Tropical Depression Twenty-Five was located over the northwestern Caribbean Sea about 220 miles (355 km) southeast of Cozumel, Mexico. It’s moving toward the northwest near 9 mph (15 km/h), and a gradual turn toward the north-northwest with a decrease in forward speed is expected during the next couple of days. On the forecast track, the center of the tropical cyclone should be near the northeastern Yucatan Peninsula on Saturday.

Maximum sustained winds are near 35 mph (55 km/h) with higher gusts. Some strengthening is forecast to take place, and the depression is expected to become a tropical storm by Saturday morning. When that occurs, it will be named Gamma.

The next complete advisory will be issued by NHC at 5 p.m. EDT with an intermediate advisory at 2 p.m. EDT – www.hurricanes.gov

There is a tropical wave over the eastern Caribbean Sea that is producing a large area of disorganized showers and thunderstorms, accompanied by locally heavy rainfall and gusty winds. This wave is forecast to move westward at 15 to 20 mph during the next several days, and environmental conditions could become a little more conducive for development when the system is over the central or western Caribbean Sea early next week. It has a near zero chance of formation during the next 48 hours and a low (30 percent) chance during the next five days. – www.hurricanes.gov