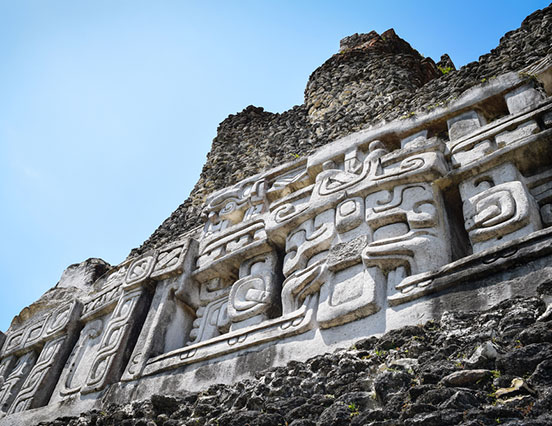 Xunantunich, or Stone Woman, is one of the country’s more popular Mayan sites, located just across the Mopan River in San Jose, Succotz…one kilometer away from the Guatemalan border. Centuries ago it served as one of the more important ceremonial centers of the Mayan Civilization in the region, and today the site is in the spotlight once again. Archaeologists, university students from abroad and invited guests today headed west for a first look at some of the Stone Woman’s treasures, unearthed during an ongoing excavation. Mike Rudon was there and has the story.

Works have been ongoing at the Xunantunich ancient ceremonial site for a couple years now, with archaeology students working along with the Department of Archaeology. Just recently attention was focused on this Mayan mound, and the team struck gold, historically speaking. “We decided to focus on the south eastern end of the site which is these two small temples to the left because we never really understood why they were placed there. So in the exhibitions this year and the conservation work, we located two stelas; one large carved stela that’s broke and then also a panel. It’s actually a panel and we labeled it panel number three because we have two other panels already here on the site. And the panel is fascinating because the panel has on it hieroglyphic inscriptions. It has a set of four glyphs there and those glyphs tell us a story.”

According to Morris, it is a story of Mayan royalty. “On one side of the panel, there is a date and it is second of December 638 AD and it commemorates the death of a woman and her name us Lady Batzek and she was literally the wife of the ruler of Caracol at that particular point in time, Lord Kantu. And Lord Kantu is famous for his military exploits. Caracol at the time defeated a lot of the major sites in the area, major cities like Tikal, Naranjo; Caracol had defeated those sites. And they had done so because they were able to join forces with another site, Clakmul. Lady Batzek is actually from Calakmul.”

So how did a panel from Caracol end up at Xunantunich? Morris says the story told on this panel has connected some vital historical dots. “Somewhere down the line, Caracol was defeated by Naranjo and Okanal and they took the stairway panel that was at Caracol to Naranjo, cut it up into pieces and gave a part to Xunantunich and part to Okanal. These are the sites that actually helped Naranjo fight with Caracol. So even in antiquity, you have geopolitics; you have cities aligning with each other to fight with each other and to conquer each other. And so this finally tells us the remaining puzzle as to why Xunantunich, in the late terminal classic which would be 700 to 900, why Xunantunich became such a powerful city in this area.”

The find is a significant one – not only the stelae and panel but also shards of pottery, obsidian and bones which tell tales upon which these historians and archaeologists thrive. Excavation is expensive, though, and really the Department survives only through largesse and eager hands from abroad. “We are a little department, but we do a lot of fundraising; we go abroad and we encourage a number of universities; in this particular case, we are working with the northern Arizona University where my good old esteemed friend, Doctor Awe, teaches now, so he was able to generate some funds there. We work with the University of Texas, San Antonio, who also provided us with some funds. We have a private donor from outside who has generously given us fifty thousand dollars to carry out work here. NICH provides some funds; it is all a fundraising thing that we do. We apply to the National Science Foundation for funds; the U.S. embassy. So the Government of Belize doesn’t have the money to do the work; we have to raise the money and we do that outside of the country.” “You just have to look at Lamanai, Caracol…what’s happening here in Xunantunich and you will see that there is so much more to be excavated, there is so much more to be unearthed. The amount of work that has to be done is incredible. We don’t have the money to unearth every single Maya mount that we see, but working in collaboration with the universities and with our people here, we are able to slowly do the kind of work that needs to be done in Belize in terms of our Maya sites.”

Today, there is excitement at Xunantunich. With a major find so early into the excavation, there is anticipation and hope that the mound will yield even more treasure closer to the center. Mike Rudon for News Five.