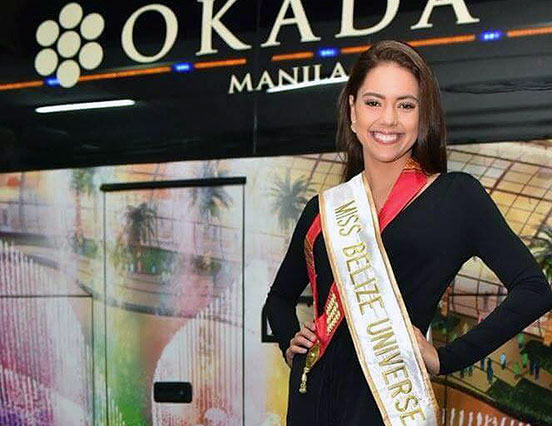 Rebecca Rath is among ninety delegates from countries all over competing for the crown of Miss Universe. Only once has Belize been able to make it among the top ten was in 1970’s, Rath hopes to break and improve that record. But the challenges for the girl from Dangriga are immense. Tonight, she is in Manila, Philippines, host of the pageant, where she is gaining points and turning heads. News Five’s Duane Moody has been following Rebecca’s progress.

Social media is abuzz with news about Rebecca Rath, as the twenty-three year old beauty ambassador attempts to capture the title for the first time for the Jewel. Rath, who is from the Culture Capital/Dangriga, is currently in Manila Philippines along with eighty-nine other delegates from across the world vying for the crown. Last Tuesday, she arrived at her destination. Not too long after, it was hair, makeup and photo shoots with other delegates. “I’m back in my room after a long day of fittings and registration. We had a whole bunch of paper work to fill out and then photo shoots and three interviews. So it’s a very long day and very hectic because there is about eighty of us girls trying to get this long list of things done. But thankfully I am almost done. I have one more thing left to do and that is pick my competition swimsuit.”

…and competition ready Bex is. Her costume, which was made by David Matus and Roberto Pasos is depicting the scarlet macaw bird and her competition gown was designed in the U.S. While she only just now decided to take on pageantry, Rath is no stranger to competition. She is a volleyball athlete now turn coach and she works with young people in her hometown. Her preparation has her confident. “I am feeling very confident. There are some beautiful girls here and some really nice people, but this is a competition and I am going in it, doing my best and keeping all of you in my mind. It’s a lot of work…l had to change my entire lifestyle. I mean it is a mindset that you have to get into and just stick with it until the pageant. So it’s been working on my body, working on my speech, working on world issue…just being able to be educated and knowledgeable about what’s going on in the world because you never know what they’ll ask you. So it’s a lot of work but I am enjoying it.” But while the pageant has many areas of competition, including the preliminaries and the dreaded questions, we have all come to anticipate the finalists’ personal definition of what it means to be “confidently beautiful.” Bex says, “I think what makes a woman confidently beautiful is being comfortable with who you are and what you believe in. Confidently beautiful means being genuine and respecting others; being able to make an impact on those around you based on your values and actions and not solely on your appearance.” Go Belize! Duane Moody for News Five.

The pageant airs on Fox on January twenty-ninth at six p.m. We’ll bring you that and periodic reports from Manila.