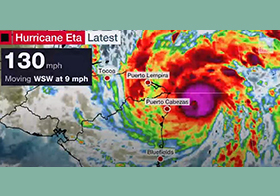 Hurricane Eta has intensified into a Category 4 storm and is expected to bring devastating winds and storm surge to the coast of Nicaragua, as well as potentially catastrophic, life-threatening flooding rainfall that will last for days in much of Central America.

Eta is also only the fifth Atlantic Category 4 or higher hurricane to occur in November. Paloma in 2008 was the last November Category 4 hurricane in the Atlantic.

Eta is centered off the coast of Nicaragua in the western Caribbean and is tracking in a west-southwesterly direction.

Maximum sustained winds in Eta increased from 50 mph to 120 mph in the 24 hours ending 1 p.m. EST Monday. That’s double the criteria for the rapid intensification of a tropical cyclone, which is a wind speed increase of 35 mph or more in 24 hours or less.

Additional strengthening is expected as the center of Eta approaches the coast of Nicaragua through late Monday night and early Tuesday. Eta is expected to be an extremely dangerous Category 4 when it nears landfall in northern Nicaragua by Tuesday.

There will be a destructive storm surge near and just north of where Eta crosses the coast. Parts of northern Nicaragua could see an inundation of 12 to 18 feet above normal tide levels.

Some of the worst wind and storm surge impacts could affect the city of Puerto Cabezas, Nicaragua.

Eta’s most widespread threat will be heavy rainfall that will last for days well inland across Central America, since Eta is slow moving.

Catastrophic, life-threatening flash flooding and river flooding could occur in some parts of Central America, according to the National Hurricane Center (NHC). Landslides are possible in areas with mountainous terrain.

Here are where the heaviest rainfall totals are predicted by NHC in Central America:

-15 to 25 inches, with locally up to 30 inches in much of Nicaragua and Honduras

-10 to 20 inches, with locally up to 25 inches in eastern Guatemala and Belize

-5 to 10 inches, with locally up to 15 inches in southern areas of southeast Mexico

Parts of Jamaica and the Cayman Islands could also see heavy rainfall and flooding from Eta.

Eta will track slowly across Central America through late this week, however, its long-term forecast beyond that time is highly uncertain.

One possible forecast scenario is that Eta will simply dissipate as it spreads heavy rainfall over Central America.

However, there is increasing computer model forecast guidance that shows Eta’s spin and energy lingering over Central America for a time and then moving back over the northwestern Caribbean. That could lead to a reorganizing Eta or a new system forming over the northwest Caribbean late in the week ahead or next weekend.

Check back to weather.com for updates over the next several days on this possibility and what it might mean for any other land areas in the long-term future. That could include Cuba, the Cayman Islands, the Bahamas and South Florida.

November in the Tropics

Tropical development isn’t all that unusual in the western Caribbean in early November.

In fact, several storms have formed in this area over the last 70 years.

Notably, hurricanes Paloma (2008) and Michelle (2001) have formed near Central America and then moved northeastward toward Cuba. Paloma intensified to a Category 4 near Cuba before weakening to a Category 2 at landfall in the country, causing heavy damage in both Cuba and the Cayman Islands. Michelle was one of the most significant hurricanes in Cuban history at the time, causing billions in damage as a Category 4 hurricane.

We should expect one named storm every other November, and one November hurricane roughly every three years. Of course, some years are more active than this while others are quieter.

Historically, most systems that form in the western Caribbean are scooped up by the dipping jet stream over the United States and pushed northeastward over Cuba and the Bahamas and out to sea.

Other tropical systems form in the open Atlantic and around Bermuda or the western Atlantic. These systems are typically spawned by drooping cold fronts in that region or other orphaned low-pressure systems that break off from the jet stream.

By the end of the month, this jet stream makes it increasingly inhospitable for tropical systems to form in the Gulf of Mexico and the western Atlantic. Water temperatures increasingly get too cold for tropical development elsewhere in the basin, leading to less frequent systems.