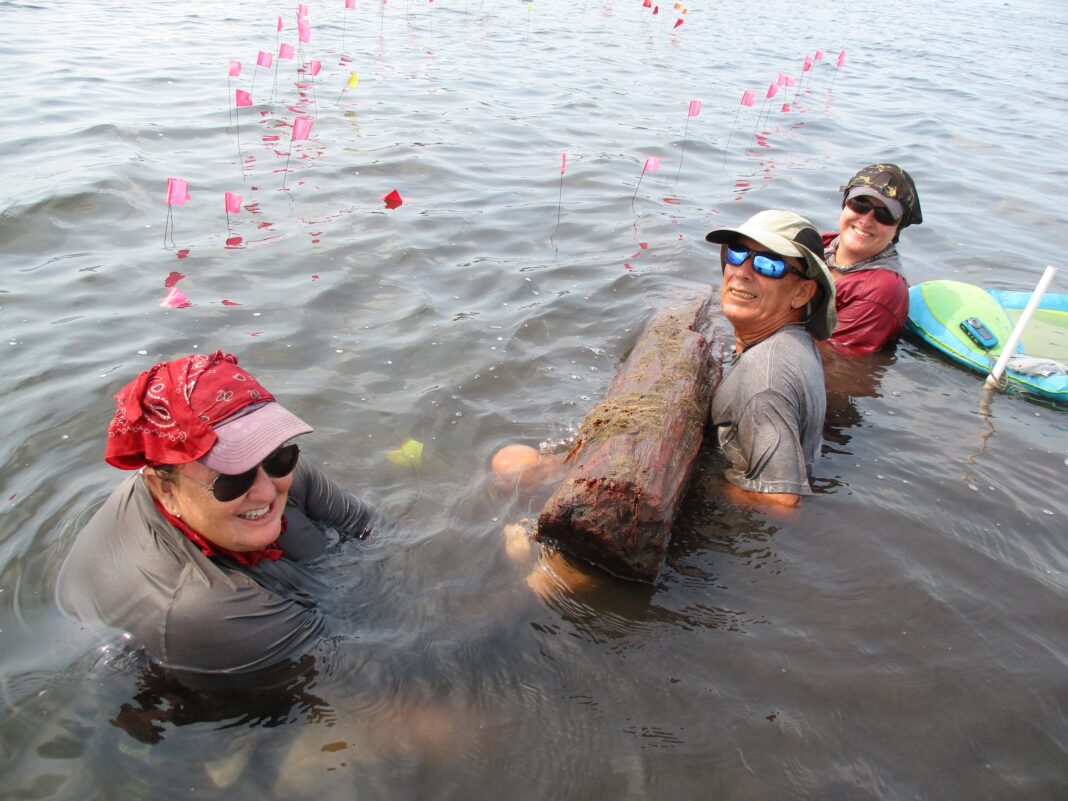 “[We found] hundreds of wooden posts that define the walls of Classic Maya ‘pole and thatch’ wooden buildings,” E. Cory Sills, a co-author of the study, said in a statement. “Since wood normally decays in the tropical landscape of the Maya area, the wooden buildings provide a rare view of the architecture that once dominated most ancient Maya communities.”

Excavations revealed the remains of several buildings dating to the 6th century C.E. during the Late Classic Maya era, with salt kitchens and a large residence added in 650 C.E. Underwater archaeologists located key finds on the lagoon floor with over 600 flags marking their locations. These flags were then digitally plotted.

“Mapping individual artifacts on the sea floor allowed us to see their distribution in relation to the 10 pole-and-thatch wooden buildings and to reconstruct the activities in the different buildings,” said co-author Heather McKillop in a statement.

Not only did the Maya “work from home” by producing salt in their backyard, they also performed household activities such as fishing, preparing and cooking food, woodworking, and spinning cotton.

According to researchers, the household would have produced salt for itself before trading the surplus with other communities. Salt was a scarce commodity inland, where Maya cities were largely growing, and most of those areas were supplied with salt works located along the coast. In total, the sites at Ta’ab Nuk Na and elsewhere in the lagoon could have provided enough salt for 24,000 people.

In an email to ARTnews, McKillop called the discovery “startling,” noting that the structures are the only ancient Maya wooden buildings that survive to this day—unlike the more common stone temples and palaces of the wealthy Maya found in city centers.

“Ta’ab Nuk Na had 10 wooden pole-and-thatch structures known from the 500+ wooden posts that had been driven into the ground, which was highly-organic mangrove peat,” she explained. “The workers lived on site, which shows it was a ‘cottage industry’, featuring families producing more than their needs [and supplying salt for] the nearby inland Maya.”

Workers used the salt surplus to trade for other commodities, such as pottery and stone tools, which were also found at the site. Artifacts recovered include a variety of pottery, along with a rare ocarina—or figurine whistle—depicting a woman.

“The ocarina from Ta’ab Nuk Na is a rare discovery at the site,” added McKillop. The instrument has “a woman on the front with a sound chamber on the back [and] a mouthpiece and two holes so it can be played.”

The inland city of Lubaantun had many such ocarinas, along with molds for making them, and a contemporary settlement whose residents needed salt, making them a likely trading partner.

Researchers also found a ceramic spindle whorl, used to spin cotton for fishing nets or clothing, as well as cohune nuts, candeleros (small incense burners), a small wooden paddle for stirring pots of food, and tools used for whittling wood, grinding maize, and processing fish and meat. There was also a figurine and a model canoe, with four holes for suspension, which may have been children’s toys.

The assemblage of pottery included Belize Red—a serving ware imported from the upper Belize Valley—along with Warrie Red, stamped jars, vases, orange-slipped bowls, and a red-slipped tobacco pot. A clay funnel was also discovered at the site, which researchers believe was used to concentrate the salinity of the brine, as kitchens used the “brine boiling” method to evaporate saltwater over fire.

Salt production at Ta’ab Nuk Na appears to have stopped after 800 C.E. during the Terminal Classic era, when another salt kitchen in Paynes Creek, known as Ek Way Nal, took over.

“Our research at Ta’ab Nuk Na provides a model for other salt production sites along the coast of Belize and the Yucatan [where] they likely also had wooden buildings, making them a more tangible and permanent part of the landscape in antiquity,” McKillop said.

Everything You Need to Consider When Choosing Sports Betting Websites