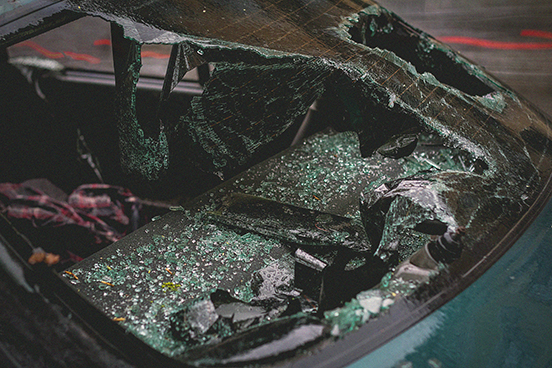 Being involved in any kind of car accident or collision can be extremely stressful.

Whether the collision is a minor accident with not much damage or a car wreck that has written on your car there are certain procedures you must follow.

So, let’s take a look at what they are.

As soon as you realize that you have been involved in a car accident no matter how small or large the first thing you must do is stop the car.

It is illegal in most countries to leave the scene of an accident, regardless of the size of the accident and whether anyone is hurt or not, so pull over and stop in a safe place as soon as possible.

It’s also a good idea to put on your hazard lights to warn any other traffic on the road that an incident has occurred. This is particularly important if the accident has taken place during the night while its dark and visibility is low.

Many people wonder what to do if in a car accident and checking for injuries is one of the first things anyone should do after they have stopped and switched off the ignition of the vehicle.

If the toy and everyone in your car is injury free, then check on the other involved vehicle to see if they have sustained any injuries.

If anyone is injured or seriously hurt, then you should ring for an ambulance immediately.

Although ringing the police is not always necessary for every single car crash, if there have been any injuries sustained or if the vehicles involved are blocking any roads or lanes they will need to be called.

When ringing the police state clearly and precisely what has happened and where you are in as much detail. The more detail you give them the better as it will quicken their arrival time to the scene of the crash.

Once the police have arrived, let them take over dealing with everything as they are trained to deal with these types of incidents.

It is vitally important that in all accidents and car crashes that you swap details with the other driver. Not doing so is a crime in most countries.

You will need to swap insurance details as well as contact names, numbers, and other personal information.  Again, it is important that you get all correct information to speed up the process for the insurance companies to deal with the incident.

If the other driver refuses to cooperate with sharing these details or they do not have a valid insurance with the car, make sure that you take down their number plate and description and contact the police immediately. It is important with these types of cases to act fast and not delay.

If there were any people who witnessed the accident who were not involved in the crash, it’s important you speak to them and get their details. This can be really important if there is any dispute between who was at fault for the accident.

Most bystanders who witness an accident will be more than happy to help with a witness statement. It’s a good idea to speak to them, get their details and find out what they saw as soon as possible.

This can be so very important if they witnessed that the crash was the other driver’s fault and not yours as your insurance company and the police can use their witness statement in the court of law. So always seek out bystanders to the incident to find out what they saw and heard.

In this day and age everyone has camera phones on them so there is no excuse in not taking photos of the evidence. This can be really useful further down the line for the insurance companies when they decide if they will pay out or not for the damage caused.

Take pictures of both the damage on your car and the other vehicle involved. Take as many detailed pictures as possible, the more the better as this will help you in the long run.

If there is any debris on the road or other things that may be important for your insurance company to see take photos of these as well. It is better to have more pictures than needed rather than no pictures of not enough to help your claim.

This is the final and most important step. Once you have done all the above it’s time to speak with your insurance company.

Detail with them as much information regarding the accident as possible making sure not to leave out any detail regardless of how small you may think it is, as the more information and evidence they have the easier it is for them to deal with the incident.

Even if you are involved in a very minor collision or accident it’s vital that you let your car insurance company know straight away. It is illegal in most countries to not report a car accident with your insurance company. If you do not report it and it is later discovered either from a third party witness or the other car involved, you can and most likely will be prosecuted and you could end up losing your license.

So even though you may think it’s a nuisance to get the insurance company involved it is something that has to be done regardless of how big or small the accident has been.

No one likes to be involved in any type of car crash let alone one that could write off your car. But if you should be involved in any such incident in Belize then follow the above advice and all laws within the country for the best outcome.